The most commonly installed equipment on the eccentric mechanical presses is the EG (Extruder Group).

Used in the production of the cored parts, it is available in more than a size. Each of these sizes, related to its dimension, allow to forge parts of gradually bigger dimensions, until the 2” valves.

Indeed through this tool, it is possible to save till 40% of material compared to the full forging modalities, without coring!

How does the Extruder Group work?

When the Extruder Group is into function, the Extruder Group, through the vertical movement set by the descent of the slide, creates the horizontal movement of 4 carriages. The function of the so operated carriage is to create some cavities (holes) in the parts, guaranteeing a significant reduction of the waste material during the production stages.

Through the movement, the EG distributes the energy generated from the press to the 4 carriages. This energy transfer is connected to the part that is going to be forged and during the deformation the material will need always more power, in particular the thicknesses of the diaphragms between the holes can require efforts higher than 450 tons.

The Extruder Group is an equipment that becomes operative at medium temperatures (350-400 °C) and it deforms the material in a considerably wide temperature range: indeed, it goes from 400°C of aluminum to 1100°C of copper.

Indeed, the Extruder Group allows the forging simultaneously of more parts (till 4 parts), at the same time of a variable cycle from 6 to 45 hits pro minute. Therefore, during the production process, a press in continuous cycle can produce till 180 parts pro minutes.

In the picture you can see an extruder group during the production. It is possible to identify 4 carriages (yellow), and, in the middle, the die where the material to forge will be deformed (in this case, brass). 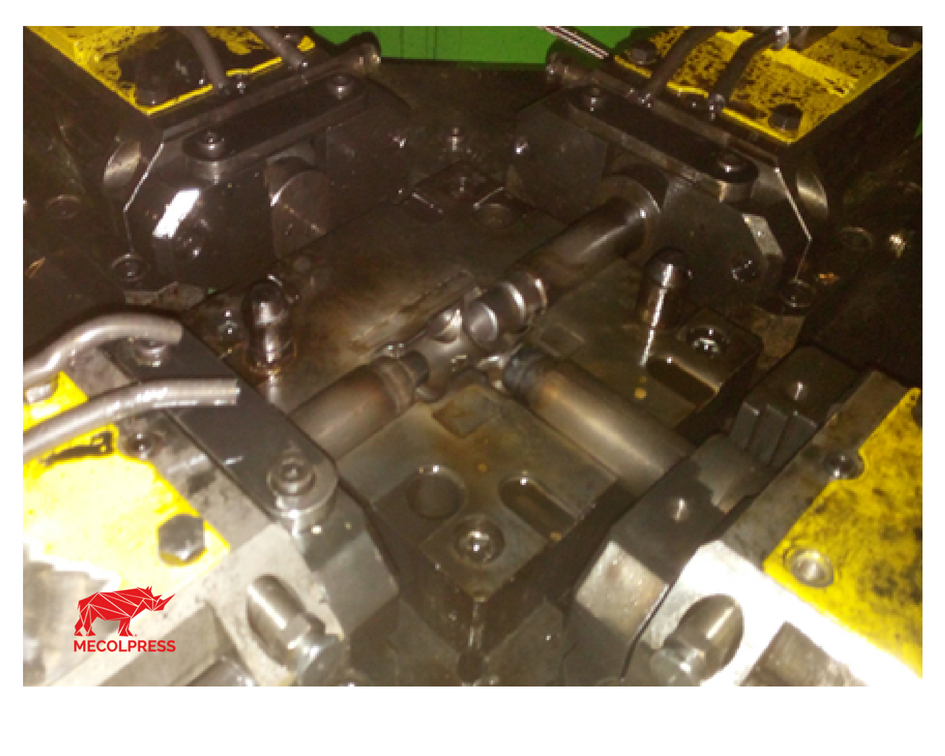 In this video you can see the GE in operation:

RICHIEDI INFORMAZIONI
This website or its third-party tools use cookies, which are necessary for its functioning and required to achieve the purposes illustrated in the cookie policy. If you want to learn more or withdraw your consent to all or some of the cookies, please refer to the cookie policy. You accept the use of cookies by closing or dismissing this banner, by scrolling this page, or by continuing to browse otherwise.OkRead